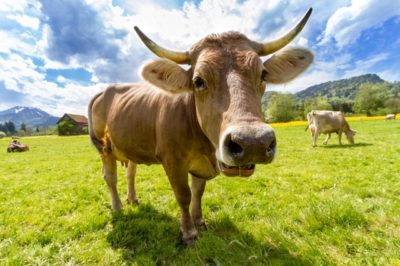 One of the important foods that people often search for is butter (חֶמאָה – chem’ah) from pastured cows because it is a rich source of  Vitamins A, D, and K2, as well as many other nutrients. The color of the butter ranges from pale to deep yellow depending on the season, the soil, and the percentage and type of feed that the animals may receive in addition to grass. (A deeper color is indicative of greater amounts of carotenoid pigments from increased amounts of Vitamin A.) Butter from cows grazing on fast growing spring and fall grass is the most nutritious. In fact, Weston Price noted a reduced incidence of heart attacks among people who eat butter made from cows feeding on spring and fall grass.

In 1930, Dr. Weston Price published an interesting paper in the Journal of the American Dental Society. For years, Dr. Price had been analyzing the amounts of vitamin A and vitamin D in butterfat. He noted that these nutrients were most plentiful in the spring and fall, when cows had access to rapidly growing green grass. During the dry winter and summer months, levels of these vitamins in butterfat declined or disappeared completely.

Further evidence of the benefits of consuming dairy from pasture raised cows comes from a study done in Costa Rica, where cows are grazed. Here, too, researchers found a lower incidence of heart attacks in people who drank milk from cows that were pastured.

Earlier experiments have shown that cows on a diet of fresh grass produce milk with five times as much of an unsaturated fat called conjugated linoleic acid (CLA) than do cows fed processed grains. Studies in animals have suggested that CLAs can protect the heart, and help in weight loss.

Hannia Campos of the Harvard School of Public Health in Boston and her colleagues found, in a study of 4,000 people, that people with the highest concentrations of CLAs — the top fifth among all participants — had a 36 percent lower risk of heart attack compared to those with the lowest concentrations.

Those findings held true even once the researchers took into account heart disease risk factors such as high blood pressure and smoking.

The new findings suggest that CLA offers heart-healthy benefits that could more than offset the harms of saturated fat in milk, Campos said. [2]

“Because pasture grazing leads to higher CLA in milk, and it is the natural feed for cattle, it seems like more emphasis should be given to this type of feeding,” she told Reuters Health by email. [3]

In addition to the above, butter contains a number of other health promoting constituents such as: lecithin which helps in the proper assimilation of fats; selenium, Vitamin E, and cholesterol which are antioxidants; short and medium chain fatty acids which have anti-tumor and other beneficial properties; iodine which is important for the thyroid; glycospingolipids, a particular type of fatty acid which protects against gastrointestinal infections; and other critical nutrients. [4]

In Israel, despite its dairy industry being considered one of the best and most sophisticated in the world, with cows specifically bred to produce copious amounts of milk, domestic butter is white. This is because Israeli dairy cows are never pastured (beef cattle are).

“While dairy cows elsewhere in the world are able to graze in natural pastures, Israeli cows cannot be left out due to the small size of the country and climate. They are fed with locally grown irrigated forage supplemented by imported grain.” [5]

Joshuah Miron who heads the Ruminant Sciences Department and oversees the health and welfare of Israel’s Volcani Center’s herd of 230 dairy cows, says that:

… Israel can grow only 30 percent of the cow’s diet. The rest has to come from somewhere. If the rest is imported, then the price of milk would be very high. Grain costs $340 per ton. Just to feed them, we couldn’t support our cows.

The Volcani Center came up with a nutritious and earth-friendly solution: using some 630,000 tons of wet vegetarian byproducts from the olive oil and food production industries to feed its dairy cows. Otherwise, these byproducts would be treated as waste and taken to the desert and buried… [6]

And according to this recent article, Tnuva (the major dairy company in Israel) has begun giving some cattle feed containing flax which they say improves the animals’ health, as well as their milk’s nutritional profile which is rich in omega 3 fatty acids. It is sold under the brand name Chalav Hameshek.

In any case, it is apparent that the nutrition they receive is not the same as that of their pastured counterparts.

European and other countries (except the US) primarily pasture their dairy cattle, as is evident by the yellow color of the butter. Countries with more temperate climates tend to keep their cattle out to pasture most of the year, while other countries bring their cattle indoors during the winter months. Other circumstances might also mitigate grazing cattle. One company, whose yellow butter is sold in Israel, explained that their butter is produced with milk from several farms including some that are too far from pasture land and are not able to graze their cattle. However, if the ingredient list does not include coloring and the butter is yellow, you can be sure that it has a healthier nutritional profile than white butter.

Fortunately, Israeli consumers interested in purchasing yellow butter from pastured cows can find what they are looking for. The dairy case in many Israeli supermarkets contains both domestic and imported butters, and consumers can find naturally yellow Makabi and Beurre De Normandie from Makabi (chalav Yisrael), Lurpak, Elle & Vire, President, Chemah Hollandit, Chemah (Willi Foods),  and other butters (of varying shades, kosher supervision, and prices) that are imported from France, Denmark, Belgium, Germany, and Holland. [7]

American consumers might be interested in these surveys of the best butters available in the States: 30 Great Butters and Butter Tasting.

Sometimes making purchasing decisions based on price is inconsequential and we can feel comfortable buying the less expensive product. Since the domestic butters tend to be less expensive than the imported ones, it may be tempting to purchase the cheaper item in this instance, too. However, as we now know, this is not the case with butter.

For a more detailed discussion of imported European butters in Israel go here. Local (in Israel) contact information for some of the companies selling imported butters can be found here.

[1] What causes heart disease?
[2] For information on the benefits of saturated fats see here.
[3] Is milk from grass-fed cows more heart-healthy?
[4] Why butter is better
[5] The inside story of Israel’s dairy industry
[6] Record making milkers
[7] Champion butter from Ireland, which has been a favorite in many Israeli households that consider it to be superior to the other imported butters, is currently unavailable.

Eating a Weston Price diet in Israel – is it possible?

How yellow my butter
Weston Price Trifold butter brochure
How to make butter (and cultured butter!)
Is all butter created equal?
Where to find grass-fed butter (in the US)