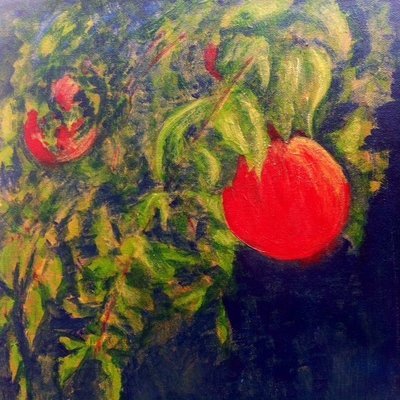 Your lips are like a thread of scarlet, your speech is beautiful.
Your cheeks are like a piece of pomegranate from behind your veil.

The Pomegranate – special to Israel and an Israeli specialty

The pomegranate (רימון – rimon) is one of the seven species (שבעת המינים – shivat haminim) identified in the Torah (Deut. 8.8)  with which the Land of Israel is blessed and which were staple foods in Israel during biblical times (the others being wheat, barley, grapes, figs, pomegranates, olive oil, and honey). The pomegranate, found growing in gardens and sold in stores all over Israel, is immensely enjoyed fresh when in season, and as juice during the whole year. (Be sure to get only pure, non-sweetened juice, preferably unpasteurized. If you juice your own you will be sure to preserve all the health benefits since it won’t be pasteurized.) And best of all, it is a nutritional powerhouse.

Growing up in the Northeast United States, the pomegranate was a novelty for me. Its foremost purpose was to be the “new fruit”, a fruit not eaten since the beginning of its growing season, that we enjoyed on the second night of Rosh Hashanah when the blessing of Shehecheyanu was said. Truth be told, I was rather disappointed with it; it was a messy, hard to eat fruit that squirted you with red liquid when you tried to suck the juice out of the arils, those clear sacks filled with red liquid surrounding a pit, which you of course spit out. After all, who eats pits?

Seemingly more prevalent in Israel than in the United States, is the custom of eating special, symbolic foods on the first night of Rosh Hashana (some eat them both nights) as signs of a blessed new year.

While in the States we always dipped the apple in honey for a sweet new year, and some people may have eaten the head of a fish as a sign that we should be the head and not the tail, most Ashkenazim didn’t do much more. In Israel, the custom to eat about 10 special foods at the start of the meal with special blessings for each is much more common, even among Ashkenazim. The pomegranate is one of these symbolic foods and the blessing we say expresses the wish that our merits should be plentiful like (the seeds of) a pomegranate. The pomegranate, for the majority of Israelis, is not a “new fruit”!

When we first moved to Israel, I was amazed to see pomegranates growing in people’s gardens; it took a while till I began to eat them in salads, pits and all. It was a few years later, however, when I read the Mishpacha Magazine article, 7 on Seven Ruby Bottles of Mitzvos, about a group of Jewish women in the UK who prepare pomegranate juice for people undergoing chemotherapy, that my perspective changed and I began to really appreciate them and anticipate their seasonal appearance in the stores.

I was amazed by the tremendous health benefits the article attributed to the pomegranate. This anecdote in particular wowed me:

When her close relative … was diagnosed with cancer five years ago, Ita Rivka was dismayed by the debilitating effects of chemotherapy on his body. Treatment left him weakened, with a fragile immune system and skin stained a pallid yellow. When she heard about the benefits of pomegranates, especially for cancer patients, Ita Rivka requested juice from a London pomegranate juice gemach. Moshe drank two bottles. Within two days, he said he “felt amazing.”

Indeed, GreenMedInfo.com – a popular health website with a database of research and articles, gleaned from mainstream medical journals – describes pomegranates as having over one hundred recorded health benefits!

Pomegranates help with everything from fighting serious viral and bacterial infections to reducing oxidative stress, from inducing programmed cell death in a variety of cancer cells to protecting the skin from photo-aging.

Especially noteworthy is the pomegranate’s ability to support the ovaries as a natural form of ‘hormone replacement therapy,’ especially as one gets older, and its ability to reverse plaque build-up in the arteries (atherosclerosis) – a condition which underlies heart disease. In addition, it has been found that pomegranate can also help Type 2 diabetics.

The Weston Price Foundation’s article, Who Needs Soda Pop with these Bodacious Beverages, suggests several ways to enjoy the juice, including fermenting the juice or peels for a delightful beverage, which would make the pomegranate’s already robust health profile even more so.

And, since pomegranate pits are high in fiber, even the pits are good for you. Another rich source of information about the pomegranate and its importance to both health and Judaic ritual is the wonderful book The Seven Fruits of the Land of Israel: With their Mystical and Medicinal Properties, by Chana Bracha Siegelbaum. It is filled with medical and spiritual aspects and recipes related to the Seven Species. Three interesting things I learned about the pomegranate (among many others) are:

You can remove the pomegranate’s arils without making a mess!

The easiest way to deseed a pomegranate is to score it several times  from top to bottom with a sharp knife, being careful to cut through the peel only, so that you have formed several sections. Cut off the top of the pomegranate to reveal the seeds and throw away the top. Pull the pomegranate apart in sections following the sections defined by the white membrane. You can then turn the pomegranate sections over a bowl, one by one, pull away the membrane and let the seeds drop into the bowl.

Alternatively, cut the pomegranate in half across its equator, turn it over a bowl and bang it with a wooden spoon. The seeds should fall out easily.

If you have more than you need at the time, simply store them in the refrigerator or freezer if you will not be using them shortly.

Whether you are having your pomegranate for a “ new fruit” or one of the simanim this coming Rosh Hashana, you can be sure that you are reaping tremendous blessings – both spiritual and physical.